Comet Lovejoy and the Pleiades

Comet Lovejoy – Change in Position in One Day

Sunday and Monday evening it was clear, so it was time to find Comet Lovejoy again. This time it was near the beautiful Pleiades. Of course, that is worth a picture.

I thought it would also be fun to see how much the comet had moved over one day – the change is quite visible. I was hoping to go for a three-day comparison, but now it’s cloudy again.

In choosing which picture is the best, I find that I am using the following criteria: good focus (automatic toss for out of focus picture unless happen upon cool “artistic” effect), no visible star trails (stars should look like a point, not a line), visibility of comet, color of objects, color of sky, and noise of sky. While I have pictures with darker, less noisy sky, they don’t show the comet as well.

I am also finding that the image quality is far better when I zoom to my desired field of view instead of cropping in post-processing to get there.

Conjunction of Moon and Saturn 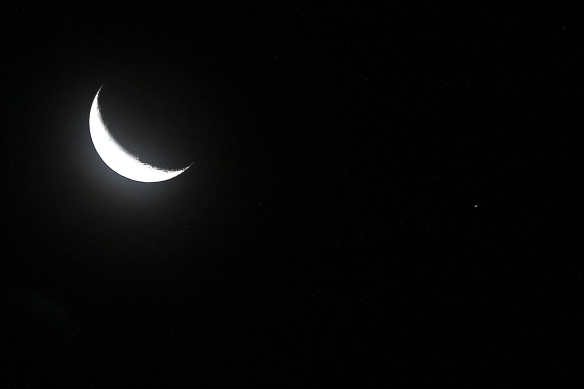 Saturn (“One of the These Things is Not Like the Others”)

You know you enjoy a hobby when you get up early and go out into the dark cold for it. This morning there was a conjunction of the Moon and Saturn, so I got up and went out. And while I was at it, I took some pictures of Jupiter and its moons, too. I checked – yes all four moons were on the same side of Jupiter this morning. I think it would be fun to make a time lapse of their motion. Might have to try it.

I learned a new astrophotography trick last night. I knew I needed to manually focus for star pictures, but it’s hard to do with dim sources and a camera designed for autofocus. But my camera has a nifty real-time view on the LCD screen with a 10x view … so I could zoom in on the moon or a planet and use the real-time view to help me manually focus. Neat! And *much* sharper pictures.

The real-time view also showed me that, in spite of the solid tripod, the 200 mm is actually quite shaky if I want to crop further in. So I get out my cable release so I could watch the image settle down on the 10x screen and then trigger the camera without actually touching it.

I also already knew that although I could easily see both the Moon and Saturn, Saturn would disappear or the Moon would wash out without some filtering. Graduated neutral density filters to the rescue! I used two (wish I had more and stronger ones) to dim down the Moon so you can see both bodies in the same photo.

Zooming in … how about now?

It’s been a long time since there’s been a comet that I could successfully see and photograph! Comet Lovejoy is a star hop from Rigel (Orion’s foot) into Eridanus, where it can easily be seen (at least in the suburbs in the northern hemisphere) with binoculars, a telephoto lens, or a telescope.  It looked gray through the binoculars, but in the pictures it is a beautiful green.

I am glad that our winter clouds cleared away and I got a clear night last night to spot it. I was hoping for a second clear night in a row so I could show that the comet is moving relative to the stars. Alas, the weather did not cooperate, and it looks like it’s going to be cloudy for a while. But I’ll keep looking up!

I got up early yesterday and again today to watch the launch of NASA’s newest spacecraft, Orion. This flight, Experimental Flight Test 1 (EFT1), is, as its name suggests, a flight test to check out critical Orion systems before we send it further away with people on board.

I cheered when it successfully launched this morning and did not get any writing done because I was too intrigued with the Orion TV feed.

Here were the thoughts I had while watching:

– I’m conditioned to watch Space Shuttle launches and know the event timing, and it was odd for me to watch a launch with different timing and steps. Shouldn’t the side rockets fall off after two minutes? Apparently, no.

– I saw some insulation popcorning off the Delta IV in the rocket cam video feed, but I didn’t have to worry about anything hitting Orion since it’s on top of the stack. That’s a big benefit to the top of the stack design.

– I was furious with the idiots who kept tweeting Orion had blown up.  Can I tunnel through the internet and terminate their connections?  Please?

– I cheered when we started getting good telemetry off Orion via its own communication system and the Tracking and Data Relay Satellites (TDRSs).

– I loved the views of Earth from the Orion cameras.

– I was happy when I saw the Orion animation showing Orion was passing the Texas Gulf Coast. Unfortunately, I hadn’t thought to use my screen capture program to catch it. And it was raining here at the time, so there was no point in going out to wave.

– Once Orion was up in its elliptical orbit, the view of the Earth was a tri-color Earth much like my tri-color Moon from my lunar eclipse photos: white limb, blue middle, and black in shadow. I need to figure out if that’s just an effect of the camera’s dynamic range because if not I want to capture the tri-color effect in the story I’m currently writing.

– Orion did, as expected, experience a communication blackout when the reentry plasma got too thick.

– The video of the landing and splashdown – from the Ikhana drone and Orion itself – were awesome. I loved the infrared point of the approaching Orion and getting to see all the parachutes deploy.

– It was great that NASA TV and ustream broadcast the entire mission, and I enjoyed sharing the event with the twitter community. I don’t tweet often, but this event seemed made for it.

I spent the whole morning watching the flight. What an awesome day!

Congratulations to the NASA and Lockheed Martin Orion teams on a flawless flight! I am such a NASA fangirl! Luckily for me, I work for a NASA contractor and occasionally get to do work for Orion. But today I just got to be a fan.  🙂 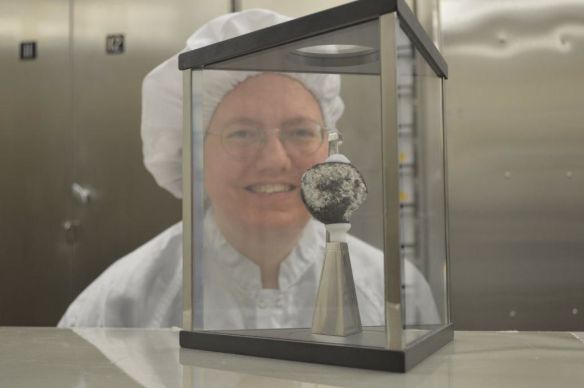 This week, I got to see something really, really, really cool at work.  I got to go on a tour of the Lunar Sample Lab through my company. It was *awesome*!

You can read my blog post about the tour on the ERC blog.

As the fog rolled in this morning, it made a neat halo around the Moon. The first picture shows Jupiter above the Moon; the second zooms in to try to capture the dynamic range I experienced in person – I could see both the lunar features and the fog halo.

If Comet ISON had survived its solar flyby, today was the first day we were supposed to be able to see it.  Although it appears that what survived is either rubble or small, we braved the early morning cold to try to catch a glimpse of what is left.  No joy.  It was too dim to be seen from Friendswood, Texas.

As Murphy would have it, we’ve had heavy clouds and rain this week, so we weren’t able to look for Comet ISON.  The clouds finally blew away this morning, so we braved the cold morning to see if we could spot the comet through the colors of the sunrise.  We didn’t spot the comet, but we did see Saturn hovering above Mercury.  It was quite striking, don’t you think?

I just got home from Apollocon 2013, which I consider my “local” science fiction convention.  I’ve been going for a number of years, and I always enjoy it.  As usual, I wished I could borrow Hermione’s time turner so I could attend multiple panels at the same time.

I enjoyed all the typical con things: meeting other authors, expanding my thinking on various issues at the panels, and coming home with new books and a list of more books and blogs that I want to read.

One of the neat things about this particular con is that because it is in Houston, home of NASA/Johnson Space Center, it has some great space science presentations and panels.  This year, the highlights for me were:

– Dr. Paul Abell‘s presentation on the Chelyabinsk meteor that exploded over Russia in February (the audio recordings of this thing are just amazing)

– Dr. Paul Abell, Dr. Al Jackson, and Dr. Stanley Love’s panel on Planetary Defense and the work being done to find and categorize near earth objects with the potential to impact our planet and cause local to knock-us-back-to-the-stone-age destruction as well as the work being done to find ways to prevent such an event from occurring should a NEO be found that is predicted to impact the Earth

Of course, I am fascinated by meteorites, so I enjoyed all these talks immensely.

But even if one is not fascinated by meteorites, these guys make their subjects compelling.  I highly recommend going to one of their talks if you ever get the opportunity.

Yesterday, as my family was driving down the freeway, I saw a bright light in the sky.  Initially, I thought it was a helicopter with its lights on, but it was moving too fast and disappeared midair.

Since watching meteor showers and trying to “catch” a meteor with my camera is a hobby of mine, I suspected I had seen a stray fireball, so I took note of the time and our location (and wished we had a dashcam that would have caught the event).

When I got home, I checked the American Meteor Society web site, and someone else in the area had reported seeing a fireball at the same time!  So I contributed to science and added my observation.

I also checked my favorite satellite visibility web site, and the time and trajectory did not match up with any visible satellites or Iridium flares (and I think it was moving too fast to be either).

That event is now AMS event 1149 with three observers to date.

Did anyone else in the Houston area see it?  Do you have any stories of other fireballs you have seen?

The most amazing one I’ve ever see was over Florida almost 20 years ago.  Amazingly bright and I was convinced that one landed somewhere.  Unfortunately, I didn’t know how to capture or report that data at the time, but I’ve always wondered what happened to it.