I was hoping we would get a clear night for Halloween, so I carved my pumpkin with an owl sitting on a telescope.

As predicted, the cold front blew through last night, and we got a cold but clear night for Halloween.  So I set up my telescope as an extra Halloween visitor treat!  Great views of the Moon, Jupiter, and Saturn.  Saturn’s rings looked especially great.

All of our family are big LEGO fans, so when we were brainstorming costume ideas with my nephews, my sister-in-law suggested a LEGO costume. LEGO bricks are a great geek costume, so we decided to run with it.

My husband, a wizard with a glue gun, implemented the idea. I think our giant LEGO bricks turned out really nice!

What costume have you created for Halloween? 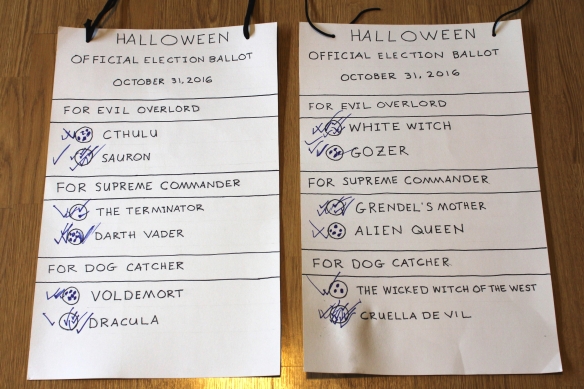 No, not that election. At my friend’s Halloween party, my friend decided that everyone should vote on our Halloween ballots. While we didn’t get votes from everyone, we did get some fun reactions, ranging from “definitely Cthulu” to “who the heck is Cthulu?” (My husband’s explanation on that race: this one will eat you and that one will enslave you.) We also got some unclear “hanging chad” results and a few people who were voting for the current underdog.

Here are the results:

The Wicked Witch of the West 5

The obvious winners: Darth Vader and Cruella de Vil. The rest are demanding a recount.

Once again, I left coming up with a costume for my friend’s Halloween party until the last minute. And while I’d love to go as General Leia or one of the female Ghostbusters, I don’t have enough time to pull together either costume. So I decided to do something that would scare people. Behold: two Halloween election ballots, with some really frightening choices. I think they make the current election look tame in comparison.

What science fiction and fantasy villains would you put on the ballot?

A friend of mine hosts an annual Halloween party, and I always struggle with coming up with a costume. Another friend posted a link to Take Back Halloween! and I found they had a costume for one of my favorite under-appreciated female scientists: Lise Meitner.

Lise Meitner worked at the Kaiser Wilhelm Institute (KWI) from 1912-1938 as the physics expert in the physics-chemistry team researching radioactivity. She and Otto Hahn (the chemist of the pair) studied a variety of reactions, including what happened when a uranium atom was bombarded with a neutron.

Unfortunately, in the middle of their research, the Nazis rose to power and annexed Austria. As an Austrian of Jewish decent, Meitner’s position at a German institute was precarious. Banned from leaving the country, she managed to escape anyway.

She continued to correspond with Hahn. Hahn and fellow chemist Fritz Strassman had discovered barium was a result of bombarding uranium.

Meitner, the physicist, then figured out with her nephew that if they used the liquid drop model for the uranium nucleus, the nucleus might split, and they could calculate the energy needed to split the nucleus and the other resulting fragment: krypton. It all fit! They coined the term fission to describe the split. Their paper describing this discovery was published seventy-five years ago.

In recognition of her work, an element was named for her: Meitnerium (109).

Should you wish to read more about her, I highly recommend the biography Lise Meitner: A Life in Physics by Ruth Lewin Sime.

The Take Back Halloween! page features a young Lise Meitner, but I am going as the Lise Meitner who escaped from Germany. Although in real life she did not really escape from Germany with the secret to the atomic bomb in her handbag, in my costume I am including a handbag with a diagram of fission, a train ticket from Berlin to Groningen, the periodic table entry for Meitnerium, and a slide rule.