The Museum of Fine Arts, Houston has recently added a new sculpture to its sculpture garden: Anish Kapoor’s “Cloud Column.”  I think it looks like an alien seed pod.  I love it!  I want to go back and photograph it at sunrise/sunset when the sky is amazing.

(Note: I think the sculpture in front of it looks like an alien, too.  Real name: Bird (Oiseau).  It’s one of my favorites.) 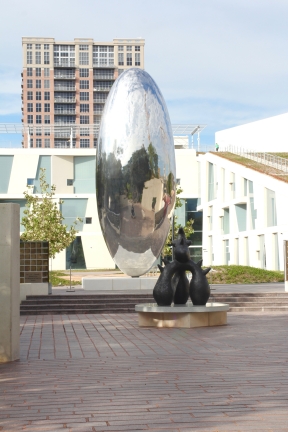 Look what came in the mail: one of my stories in Analog Science Fiction and Fact! More fun with aliens! I shared some thoughts about writing these aliens a while back and back a while. Enjoy!

Given its metallic exterior, blue-lit interior, and magnetic powers, whether Echo is an alien or a robot is debatable.  For the purpose of this blog, I am going to treat it as an alien.

Since this is a children’s movie, it comes as no surprise that the alien is cute.  Echo looks like a tiny owl with big eyes.  It’s designed appeal to the human protective instinct, and I think the design is successful.  The characters want to protect and help it, and the audience wants them to succeed.

My only quibble is that I didn’t like Echo’s limp black legs; they didn’t seem to match the rest of it.

Like Iron Giant, Echo is able to use magnetism to collect its parts.

Echo takes over the local cell phones to generate a map that leads the characters first to itself and then to its scattered parts.

Echo can understand and respond to natural human speech.  However, its responses are limited to “yes” and “no”.

How Echo learned human language and how to hack the cell phones is not clear.  Since the challenge of learning to communication with an alien species is a theme that interests me, I would have liked to have seen more about how Echo learned to communicate, but I didn’t really expect to in a children’s film.

In the end, I found Echo’s communication unsatisfying.  If it can hear human speech, understand human speech, and control the sound output of a cell phone, why can’t it use the cell phone to speak?  Technically, it did not seem consistent.  And story-wise, I think “ET phone home” is much more emotionally powerful than “one beep for yes, two for no.”  So I think the writers missed an opportunity to have Echo communicate much more powerfully than it does.

Echo is a children’s movie alien that seems to be a cross between ET and Iron Giant.  It’s cute and successful in making humans want to care for it, but not as successful as I think it could have been if its creators had let it speak.

Please share your thoughts about this movie alien in the comments below.

As it says in my blog title, aliens are one of my favorite things. I love to invent them and explore how someone could be different from us and what it would be like to live with that difference.

I also like to see what other creators explore with their aliens.

So I’m starting three new occasional series of blog posts about Aliens at the Movies, Aliens on Television, and Aliens in Books, and I’m starting with the movie Edge of Tomorrow.

I really liked the “look” of these aliens – very different from us. They seem to be made of twisted-together constantly moving ropes that form body and limbs, and they whip across (and through) the landscape with incredible speed. Because of the speed they were both challenging and fascinating to watch.

The aliens seemed to come in three types: basic, alphas, and omega. The basics were the smallest and moved the fastest, the alphas were in the middle and had faces, and the omega was much larger than the others but seemed to settle in one place.

The aliens functioned as a single unit, but I got the sense that the aliens were not a distributed mind, but a hierarchical system. The basic aliens fought. The alpha aliens provided sensory input, and the death of an alpha triggered the time loop capability. The omega did all the thinking and planning. If the omega died, the others did, too.

If one of the alphas is killed, the aliens can create a time loop and reset the day and start over, experiencing the day over and over again until they get it right. What is it like to live like that? We experience just that with Major William Cage (Tom Cruise), who hijacks the aliens’ “repeat until right” time loop life when the alien’s blood spills on him in battle. He experiences a day in war hell over and over again, trying each time to get a step further towards killing the omega alien and survive, but failing and dying each time. In a twist on Groundhog Day, he has to die in order to try again. In a way, it’s like living in a video game where you can reset to a saved point and try and try again. But fighting and dying day after day after day … is hard and exhausting for a human, who is, after all, a single organism. Especially when he has to kill himself to make sure the loop starts over. But for the omega, it’s only a small part of its extended self dying day after day as it struggles to find the best path forward. Perhaps it’s only like getting a daily paper cut, worth it for the chance to get infinite do-overs until it can beat the day.

We don’t learn much about what motivates the aliens and what they want, other than to wipe us out so they can live on our planet. In this regard, they are not much more than monsters.

The aliens don’t seem interested in communicating with us (except, possibly, to lure us into traps). In this regard, they are not much more than monsters.

For motivation and communication, the Edge of Tomorrow aliens are not much more than monsters, but visually they are a treat. The ability to create their own time loops is fascinating, thought-provoking, and, of course, the key idea of the movie. What would it be worth to have the capability to redo a day until you got it right? A paper cut a day? Your death a day? The end of the world – every day? What do you think?

Please share your thoughts about these movie aliens in the comments below.

I am currently working on designing the characters for my new project.  I knew the main character and the basic story arc, but the project wasn’t moving along smoothly because I didn’t really understand anyone else in the story.  All the other characters felt like cardboard cutouts.  So I started planning out several of the other major characters, and now I’ve got a much better (and somewhat different) plan for the story based on the characters.  Which is good.

The bad guys in this story are aliens.  I haven’t planned out any of their characters.  Heck, I haven’t even named them. They weren’t even on my first list of characters to plan, even though my main character is going to spend a significant chunk of time with them.  They’re just nameless, faceless (literally, in this case) bad guys.  And I could leave them like that.

In fact, it’s tempting to leave it like that.  They’re the bad guys, after all.  Why would I want to spend time in their heads?  Why would I want to think about them like they are actually individuals?  Why don’t I just label them as evil and give them some repulsive philosophy and be done with them?

So that’s my plan for my writing time this weekend … understanding my bad guys.

I am working on revising a short story I wrote about sea aliens earlier this year.

The sea aliens are, physically, nothing like humans.  They look like saucers, move by sucking in and blowing out water, and communicate by wrinkling their surfaces.

Even though it is critical to the story that the sea aliens communicate with one another, I missed two obvious opportunities to have them do so.  In both cases, the aliens are in a dangerous situation.  If humans were in a similar situation, we would be nattering away to each other about what to do.  I live on the Texas gulf coast, and whenever a hurricane comes into the gulf and especially when Hurricanes Rita and Ike were headed for us, we were continuously talking about what the hurricane would do, what we should do, and what we could lose.

So why didn’t I have my aliens doing the same thing?

After all, part of the fun of creating aliens is to think about what life would be like for a different type of intelligent being.  What would threaten them? What would be important to them?  What goals would they have?  The answers to these questions depend up on the aliens, of course, and I find them fascinating.

And yet I didn’t have my aliens communicating when they would be.

I think that is because I fell into the laziness trap and didn’t think through how the aliens would behave in these situations.  And, because I didn’t think, I had them behaving like the animals they look like instead of like the aliens they are.

That was wrong, and I am fortunate that some excellent critiquers pointed that error out to me.  I will be fixing it in the rewrite.

Have you thought through how the aliens behave in your SF?

I like to think about how sentient alien species could be radically different from us.

The aliens I am writing about now don’t have hands or tentacles or any other type of appendage that they can use to manipulate their environment.  The result of this difference is that there are a lot of things we can do that they cannot.

On a purely physical level, a species without hands cannot hold things.  They cannot pick something up and carry it somewhere else.  If you’ve ever watched a baby develop, you know that being able to carry stuff around is a key driver for wanting to walk instead of crawl.  It’s a darn useful thing to be able to do.  If an alien were configured so that it could nudge things onto part of itself – eg its upper surface – then it might have a crude capability to carry things around.  But it would be very crude compared to what we can do.  My aliens cannot hold things the way we do.

Finally, if a species cannot hold things or use tools, it is not going to create physical things.  It’s not going to mold clay into bowls or build skyscrapers.  Being a creator is a fundamental aspect of who I am, and I know I am far from alone in feeling so.  This is not part of my alien’s identity at all.  (Although it could be – hands, ownership, and tools are not required to create music or stories…)

And yet … assuming a handless alien could also be sentient … and there’s no reason such a thing couldn’t evolve … there are still a lot of points where we could be the same.  A handless alien can still love, can still plan, can still fight, and can still contemplate what would be different if they had hands.

What do you think a handless alien would be like?  And, more interestingly, what could an alien have that we do not that would have such a profound effect on who they are?